"Christmas is a-comin', and the goose is getting fat."

When a man – though his heart be black as soot from impure thoughts about nice ladies, or green with envy that other folks got warm clothes to sleep in and good stuff to eat – can lift his eyes to the heavens and sing praises to the baby Jesus (who grew up to be Santa Claus so he could bring Christmas presents to all the good boys and girls) . . .

"Kindly put a penny in a poor man's hat." 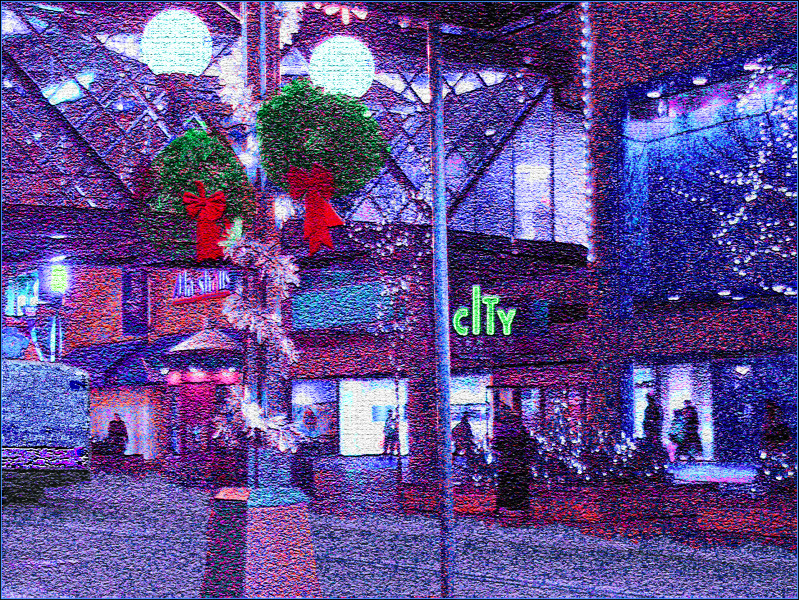 . . . when that man who, knowing full well that Santa doesn't leave presents for bad men who drink too much and sometimes think swear words – though he would never say them out loud – and who has never been so righteous as to deserve a Christmas present himself, can still wish that Wise Henry the Geek, and maybe Tokay Red might get theirselves something nice . . .

"If you haven't got a penny, then a hay bunny will do,"

. . . and, when that man can express through song his fervent hope that the little Santa Claus Christ child will have a happy birthday and a cake with candles and a tree – and please say hello to Mary and Joseph and Mrs. Claus . . .

"If you haven't got a hay bunny, then God bless you."

. . . then the sins he has worn all year long like iron chains across his shoulders are borne upward with the song, and he ascends within himself until he can look the passing shoppers squarely in the eye.

And he can nod his appreciation when they toss their spare change into the violin case.

"If you haven't got a hay bunny, then God bless you."

Little Ernie wasn't sure what a hay bunny was, but he thought he'd maybe rather have one of them than a penny anyway. All a penny will buy nowadays is a stick of bubble gum – won't even get you a lickery stick. Given a choice, he'd happily take his chances with the hay bunny.

"Christmas is a comin', and the lights are on the tree."

He barely noticed the continual clink of dimes and quarters, and the occasional half dollar, that the assemblage of clerks and last-minute shoppers tossed into the violin case. He wasn't much of a counting man, and, even if he had been an adding and figuring sort of guy and even if he knew the total receipts, the amount would have had no meaning for him until Wise Henry had converted the dollars and cents of it into burgers and Snicker bars and muscatel.

"How's about a turkey leg for dear old me?"

This guy with the fiddle was pretty darned good; he knew all the Christmas carols. In fact, he played one that even Little Ernie didn't know, but since – lacking his vocals – the fiddle was insufficient to continue the flow of quarters, from then on the fiddler made sure Little Ernie knew each song before he played it.

"If you haven't got a turkey leg, a turkey wing will do."

Large feathery snowflakes began to fall, hushing the bustle of passing streetcars and turning the Nicollet Avenue shopping district into an animated Christmas card. Colored lights and balsam boughs adorned the lamp posts, and the lights came on to illuminate the decorated shop windows. Each of Dayton's windows had been converted to miniature Santa's workshops with mechanized elves hammering and sawing and gluing and painting tiny dolls and sleds and Red Ryder air rifles. And, over it all, Little Ernie's clear angelic voice rang out,

"If you haven't got a turkey wing may God bless you."

And, for this brief interlude in their work-a-day world, folks within earshot forgot the war and the price of eggs and the personal distractions that otherwise intrude upon their yuletide celebrations, and they bent an eager ear to the melodies of the season.

Little Ernie saw around him a sea of smiling faces: Mothers cradled infants in their arms; little girls and boys clung to their parents' coat tails; fathers struggled to balance packages from Dayton's and Donaldson's and F. W. Woolworths' in one arm while they dug for pocket change with their free hands. And their smiles illuminated their eyes, as well as their incisors.

"If you haven't got a turkey wing may God bless you."

Heaven must be just like this, all lights and snowflakes and smiles and the smell of balsam boughs – only with presents – even for folks who maybe drink too much sometimes, and who, when they look at nice ladies, maybe think bad thoughts.

"Christmas is a comin', and the cider's in the keg."

Cider is a kind of wine. Wise Henry had told him that one time. And, though ordinarily the slightest hint on the subject of wine would sorely trouble a thirsty man, Little Ernie was safely under the spell of the song and had no need for alcoholic stimulation.

And though there was a time when he had been known to stand on street corners and beg money from strangers, Wise Henry had explained to him that exchanging a Christmas carol for spare change is not begging; it's doing business. Little Ernie was now a 'jitimate businessman engaged in 'jitimate commerce.

He gave a businessman's wink and a tip of his ratty fedora to a nice lady with bright blue eyes and a pleasant smile as she bent to drop a handful of nickels and pennies into the fiddle case.

That was a nice touch, that wink and a tip of his hat. Why had he never done that before? Oh. Yeah. He'd always laid his hat on the sidewalk to collect his businessman's pay – his 'jitimate earnings.

Maybe he could get another hat someplace. Maybe they'd give him a nice hat at one of the sallies. Then he could use the ratty hat to collect his pay, and he'd wear the nice one for winking and tipping at nice ladies.

"Christmas is a comin', and the egg is in the nog,"

What do you suppose a nog is? Maybe it's a nest or a soft cloth where the chicken lays the egg. Or maybe it's a kind of frying pan. Wise Henry will know . . . if he can only remember to ask.

"Please to let me sit around your old Yule log."

No need to ask what a log is. Though he didn't remember ever having seen one, he knew it was just a really big stick. Maybe a nog wasn't anything at all. Maybe it was only a word they made up to rhyme with log.

"If you'd rather I didn't sit around, then stand around I'll do."

He now became aware of a familiar flop, flop, flopping, which, because it was perfectly in time with the song, he hadn't noticed until it had come quite near. And he looked up to see Wise Henry approaching from across the avenue.

"If you'd rather I didn't stand around, may God bless you."

And then he saw that the last of the shoppers had thrown the last quarter into the violin case and, having turned his back on the music, was hurrying to catch the last streetcar.

The fiddler was already ogling the bonanza of coins, even as he played the last few notes of the song.

"If you haven't got a thing for me, may God bless you."