To begin with, there is no magic line that cleanly divides the aesthetic from the non-aesthetic. Nor is there any way to define with accuracy the term aesthetic. The best we can do is dance around the subject and hope to stimulate your thoughts on the matter.

The one thing that can be said with certainty is that aesthetics involves the inter-relationships of the constituent elements of the work of art. Remember the Star Kist commercial in which Charley the Tuna plays on the harp to demonstrate his good taste. When his companion remarks that he is playing only the same note over and over again, he replies, "It's a great note. Beethoven used it all the time."  The point is that no musical note or, for that matter, no line or no color is beautiful in and of itself, but only as it relates to others in its immediate environment. It may even be argued, though I don't intend to do so here, that we can perceive no single note, no single line, no single color, except in relation to its environment.

Aesthetics then, or art if you please, is a mysterious something that either occurs or does not occur in a work as a consequence of the interrelating of the constituent elements -- be they musical notes, lines, textures, colors or even ideas -- of the work in question.

No one, not the greatest philosophers, not the greatest artists, not the greatest musicians can tell why some aesthetic relationships in a composition constitute great art while others create mediocrities. And this is as it should be. Once things become fully understood we lose interest in them. If there were no mystery to art then no artist would want to paint. The making of art is the process of creation; and one can not create that with which one is already familiar.

Now, on the assumption that you have understood the gist of what I have said, I should like to carry you further afield to discuss the different, though still intimately related, types of aesthetics. It would all be very neat and convenient if we could cleanly divide conceptual art from perceptual, or pre-conceptual, art. Unfortunately, with no exception that comes to mind, every art medium has elements of both conceptual and perceptual relationships.

Perceptual aesthetics or (emphatically) pre-conceptual aesthetics is best illustrated by reference to music. When we hear a succession of musical notes that fall pleasingly on the ear, pleasure is immediate. It is immediate, not only in a temporal sense, but also in a physiological sense. It is immediate in that it is pre-conceptually pleasing. We experience pleasure before we can formulate the thought, "Well now, that is just the sort of song Aunt Sophia would have liked to sing if she had known how to sing." or, "That music sounds so much like an apple I can almost taste it."

In other words, perceptual appreciation occurs at a point in the psychological and neurological circuitry somewhere between the initial perception and the arousal of associational concepts that have been stimulated by our perception.

Would you criticize a Beethoven symphony because it doesn’t sound like a cathedral? or a bowl of fruit? or a naked lady?

We have, then, two discernibly different types of aesthetic relationships, the conceptual and the pre-conceptual, or perceptual. But, merely because there is a discernible and describable difference, we cannot conclude that one exists independently of the other, or even that one does not crucially effect the other.

Conversely, as one might well expect, in the so called perceptual arts, the visual and musical arts, it is the perceptual or pre-conceptual relationship that dominates. In the visual arts more so than the musical arts, conceptual relationships are apparent. Many paintings of course have definite subject matter and moralistic or religious themes. And even in the modern, non-objective art, there is still a hint of subject matter, whether or not the artist intended it or was even aware of it.

However -- and this may well be the single most misunderstood point of all in art appreciation -- merely because conceptual relationships exist in perceptual art, these conceptual relationships do not necessarily have aesthetic value. They do not necessarily serve any higher function than as a tool to order the perspective, as a stepping stone into the visual realm of the painting. Visual aesthetics must always predominate in aesthetic judgments rendered by the visual artist, as well as in critical judgments rendered by the viewer.

Art historians and critics often speak of twentieth century aesthetics as opposed to the aesthetics of an earlier age. In this, they betray a fundamental misunderstanding of the term. What they really mean are the changing styles and gimmickry that enjoy transient popularity with art biz participants. Artistic styles and gimmicks come and go in response to changing social and technological conditions. But aesthetic values are constant; they remain as they have been these countless centuries since that first receptive troglodyte crept out of his cave to marvel at the colors of the setting sun.

Most people can appreciate a sunset. Why then are they unable to appreciate the aesthetic value of non-objective art? Actually their confusion stems in large part from the pseudo-sophisticated bullshit that enjoys such current popularity. We have all been taught in elementary school and beyond that art is the representation of some physical reality. A picture is a picture only when it is a picture of something. When confronted with non-objective art most people try from force of habit to see some tangible object in the painting. Failing this, they willingly accept the word of any would-be guru who steps forward with an explanation, no matter how ludicrous that explanation may be.

And so we have had dada and pop-art and countless varieties of "really cool stuff" as though anyone with a neat idea could just grab a brush and create art. Real artists, like scientists, operate on the ragged edge of understanding -- groping through gray uncertainty. They are to the pop artist and the illustrator what Albert Einstein was to the parlor magician. 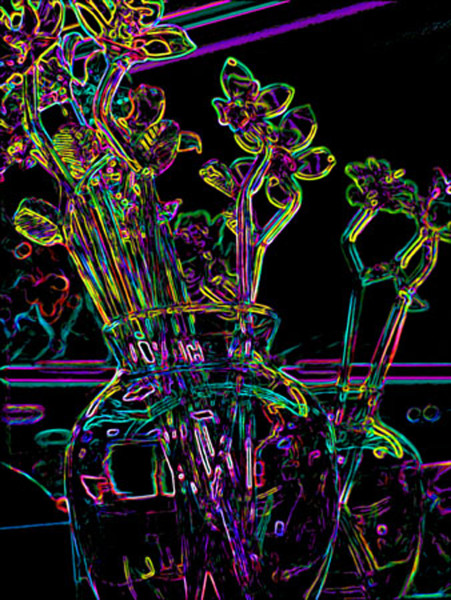