I had originally intended this as an introduction to "World Enough and Time." I reasoned that most readers prefer to just jump right into a novel without bothering with a bunch of boring crap they don’t want to know in the first place. Then when they have finished – assuming they enjoyed the story – they might go back and read the introduction. Perhaps I was wrong in my assumption; there may be people who actually do begin by reading the introduction. I’m quite sure that the four or five who have mentioned it to me do, anyway.

Well there then now, I have moved it to the end of the book where it shouldn’t bother anyone. Read it if you choose . . . or don’t. Though I would rather you do so, the choice is yours alone. 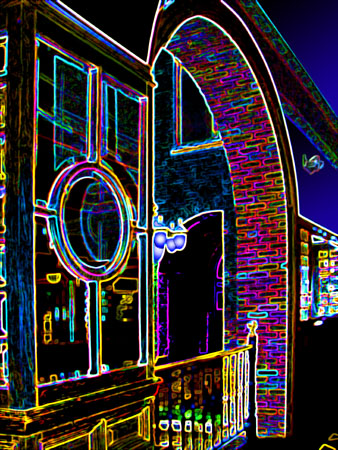 Many years ago, in my early forties, I found myself in one of those dead-end factory jobs that require an energetic physical presence, but leave the mind free to roam. I – having always enjoyed a restless intelligence – was thus able to endure the endlessly repetitive ritual of the assembly line. I did not waste my time, as I might have while standing in line at the Post Office, with idle reverie; I returned again to a topic that had occupied my mind, off and on, since I first heard the word “eternity” uttered by a sanctimonious old gargoyle in Sunday school: the nature of time.

Obviously, arrows (when shot by archers better than I) do, indeed, hit their targets. Therefore, there must be a discreet, indivisible, particle of space. Then, once the remaining distance has been reduced to the linear dimension of that quantum particle of space, there will be no such thing as half-way; the arrow must travel the entire remaining indivisible distance.
The same argument may be made for the quantum particle of time: Before we reach that point in time, at which the arrow will strike the target, we must first reach half-way to that point in time, etc.

I have never been able to refute this argument. If ever I – or anyone else – should refute it to my satisfaction, then I will simply have to revise all my thinking on the nature of time. I will not do so gladly, but I will have to do so.

But simply accepting the validity of the quantum nature of time and space, though the concept occupied much of my waking thoughts, was leading me nowhere, except that the example given seemed to inextricably link time to space. This link may have festered for some considerable time in my subconscious, without ever breaking through into a conscious thought.

Consider now that ideas do not exist in isolation. At birth each of us was issued a large duffle-bag in which we store every idea we have ever encountered. And those ideas may rest quite comfortably side-by-side, along with our collected experiences and sensual impressions, without ever crowding or conflicting with each other. But, when turmoil agitates that duffle-bag, those ideas will rub and jar against each other, and against all the other detritus we have collected, often to the detriment of one or more of our nurtured notions, but sometimes leading to the glorious unification of two ideas or of a group of ideas, producing, as a result of this accidental copulation, the birth of an entirely new idea.

Among the many ideas churning busily away in my duffle-bag, were thoughts about quantum weirdness – that is of the insolence of sub-atomic particles behaving in unexpected ways: electrons occupying all possible points – a so-called cloud of probabilities – in their orbits until, under observation, they correct their behavior, as school boys when the teacher enters the classroom; or photons exhibiting characteristics of both matter and energy, or travelling along many different pathways at the same time, again until they come under an observing eye.

One night as I lay dreaming – and it was a marvelous dream of sexual content, if that sort of thing interests you – I heard an appropriately stentorian voice announce from somewhere overhead, “TIME BLINKS!”

“Time blinks,” only this and nothing more. That two word sentence, though utterly meaningless and foolish on the face of it, yet to me explained everything. I suddenly saw time and space, not as separate entities, but as alternating aspects of the same phenomenon. I can best describe this relationship by comparing it to a rapidly spinning disk having one color on one side and a different color on the other, which – because it is spinning – we see not as a disk of two colors, but as a sphere of the hue resulting from a blend of the two colors.

Though I was very tired (my job was not mentally arduous, but, physically, was quite demanding) I lay awake the rest of the night drawing the many inferences implied by the birth of this far-reaching notion – the most surprising of which is that time, like space, must be multi-dimensional. And that particular inference has, itself, many implications.

We experience time in a single dimension, running from the future, through the present, to the past – that is, in a single time stream. But, if time is multi-dimensional, then there may be other time streams above and below, and to the left and right of us (if I may use spacial terminology). And multiple time streams could provide a possible explanation of quantum weirdness.

Take, for instance Schrodinger’s cat: In 1935, Erwin Schrodinger proposed a thought experiment in which a cat, placed inside a sealed box, will be either dead or alive, depending upon the state – mass or energy – of a sub-atomic particle. According to quantum theories, it exists in both states until someone, representing the observer, opens the box, at which time the particle will assume one state or the other and not both, therefore, the cat will be either dead or alive – not both.

So, we have several different observers, all with the same name, the same memories and – until that point at which they open the box to find a cat either dead or alive – the same past.

But each of these different observers has his own unique present, and will have his own unique future, or rather a multiplicity of unique futures, based not solely on the state of the cat he will find, but on the playing out of countless other clouds of probabilities, which will be expressed as multiple realities existing side-by-side in multi-dimensional time. And each of these realities will contain innumerable other clouds of probabilities – to be expressed as a nearly infinite – and exponentially growing – number of multiple realities, existing side-by-side in multi-dimensional time.

When I arrived at my conclusions, I had assumed that the theory was mine alone. I do not have the pleasure of congress with academics, and none of the books I had read suggested the existence of this theory anywhere but in the moist recesses of my own twisted little mind.

But I later learned that, in 1957, just such a theory had been proposed by a physicist named Hugh Everett III. I was both pleased to have affirmation of my wild supposition, and a bit miffed that I could no longer think of it as my theory. He had, after all, submitted his paper over twenty years before I came up with the idea. And, unlike my voice from on high, he had mathematics to support the theory. I have long maintained that mathematics is the essential difference between a scientist and a barstool philosopher.

What matters is that history will attribute the theory to him, and I will rate not so much as a footnote. Well, there goes my shot at a Nobel Prize.

However, if you find the theory stimulating, or even entertaining, I will happily accept your congratulations. If, on the other hand, you question its validity or find it silly, pretentious and contemptible, I would invite you direct your criticisms to Doctor Everett.

Into this modest little book, for your amusement and edification, I have emptied the contents of my duffle bag. The characters I have created are not mathematicians or physicists or philosophers, of whom I know none; they are not saints, of whom I know even fewer. They are ordinary human beings, as flawed as you or I, who have been forced, by circumstances over which they have exercised no control, to confront the true nature of time and space, and the existence of multiple realities.

I wish I could have been less brutal in the telling of their story, but I harbor some hope that the happy ending will leave you feeling a little less bitter toward me.